PGSU wants to implement fair and realistic benefits for graduate workers with families to make family life at Princeton financially feasible. Princeton offers fairly generous childcare subsidies for families, but they are not commensurate with the cost of childcare in the region (the University’s new University-National Organization for Women Day Nursery charges tuition upwards of $25,000 a year). Furthermore, while the graduate worker’s health insurance is covered by the University, a spouse’s coverage costs $1,800 per year, a child’s costs $900 per year for up to three children, and there are no subsidies for dependents. An institution with Princeton’s vast financial resources should not leave any graduate students in financial precarity for any part of their degrees, especially not those with families to support.

The University of Michigan offers $2,630 for the first child, $3,850 for the second child, and up to $5,076 for three or more children; childcare subsidies will increase every year, pegged to the “average annual percentage increase in tuition at the UM Child Care Centers.” [Article XII, §A]

New York University’s graduate student union established in its 2015 contract a union child care fund to make up for NYU’s lack of support. As of 2017, the fund has $70,000 available, with a projected $100,000 by 2020. The average award of this fund in 2015 was about $2,140 per child, a number expected to increase as more funding becomes available [Article XVIIIA].

The graduate union contract at New York University, in addition to covering individual healthcare premiums, includes a family health care fund to subsidize the cost of enrolling dependents — on the third year of the contract (which is the 2018-2019 academic year), students will be eligible for an up to 75% subsidy toward the cost of premiums (depending on the number of total enrollees) [Article XVIII].

Princeton offers fairly generous childcare subsidies for families: $5,000 for one pre-kindergarten child, with an additional $5,000 for a second child. Yet these rates were established in the academic year 2007-2008 and have not been adjusted for inflation. In addition, Princeton’s childcare subsidies are not commensurate with the cost of childcare in the region. At Michigan and NYU, graduate student unions have fought successfully for expanding pre-kindergarten childcare funding and have offered creative solutions for graduate students in need of childcare support. PGSU will bargain for expanding the child care assistance offered by Princeton in order to make childcare expenses manageable on a graduate worker’s salary.

At Princeton, the University covers healthcare premiums only for individual graduate students; graduate students pay a premium for having a spouse or partner on the Student Healthcare Plan, at the rate of $1,800 per year in the 2017-2018 academic year. Students also pay a premium for having a child on the SHP: $900 per year for up to three children. There is no current subsidization of the SHP for dependents. A family of three living only off of the graduate stipend can expect to pay approximately 8.3% of gross income on healthcare.

In contrast, Michigan’s benefits are locked into their contract: students there do not pay any additional premiums for dependents. NYU’s graduate student union, in addition to winning individual healthcare coverage in its 2015 contract, also negotiated a system in which students with dependents receive generous subsidies to cover healthcare premiums. PGSU will push for health insurance plans that better cover dependents and children without putting an excessive financial burden on graduate workers.

Through community care and collective action, PMA is challenging systems that perpetuate harm and advocating for transformative change - and helping create a world where everyone is cared for without the need for oppressive and punitive institutions #abolitionnow https://t.co/XXfHbduRXz 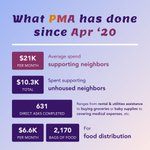 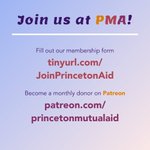 In light of the systemic failures that have been exacerbated by the pandemic, PMA has been mobilizing for the community from the ground up to secure the rights, resources, and opportunities that people are entitled to in order to pursue a reasonably decent life.
h J R
@PrincetonGSU