The graduate union at Columbia University successfully fought to get the University to create dedicated fellowships for international students.

Graduate workers at the University of Massachusetts Amherst used the union grievance procedure to argue that forcing international students to pay fees that US citizens do not pay was discriminatory. The decision was upheld by a third-party arbitrator and the University was ordered to refund all students who had paid the fee.

Postdoctoral Researchers at the University of California are guaranteed in their union contract to be compensated for losses in income due to delays in working authorization cards [Article 33, §B].

Because we are the most vulnerable workers, international students have a lot to win from a union on campus. We do not have access to many of the funding sources that help our American colleagues reduce their teaching load. The most notable example is the NSF grants. Moreover we are disproportionately affected by the difficulty of securing summer funding since we are not legally allowed to work off campus during the summer months. The inability to secure funding can be especially critical once we reach DCE status since it can translate in an inability to renew student visa.

The months before coming to Princeton are the most stressful times for international graduate students. The expenses build up quickly before we see the first paycheck, adding to the natural stress of moving to a foreign country. Supporting graduate students in this process of transition is key to making them feel valued and welcomed in the Princeton community. That is why PGSU asks that Princeton University reimburse international students for the initial costs of relocating to the US, including SEVIS and other fees associated with the visa application process.

Protections from an uncertain political climate

The Muslim ban and the revoking of DACA are some of the recent policies that have directly impacted our ability to safely carry out our work as graduate students. Princeton University’s concern with remaining impartial, not taking a political stance, and ultimately securing donations from alumni across the political spectrum limits its ability to strongly and decidedly protect its international graduate students. The statements issued by the University will always fall short from effectively protecting us. A well-funded union can provide resources to this affected student population to advocate and fight for their rights.
Return to top 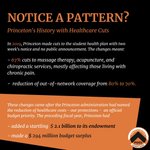 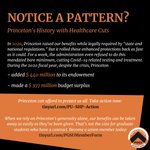